Understanding the ocean chemistry of trace elements and their isotopes (TEIs) will improve our ability to probe the past and present ocean system. Some TEIs are toxic for the environment, while others serve as essential micronutrients, being involved in many metabolic processes of marine organisms 1,2,3,4. Their interactions with the marine food web strongly depend on their chemical (organic and redox) and physical (particulate/colloidal/dissolved) speciation, with continuous exchange between these phases. Some TEIs are also diagnostic and allow the quantification of specific oceanic mechanisms that can hardly or not be investigated by direct measurements (e.g. mixing rates, vertical advection, land to ocean fluxes, carbon downward and remineralization fluxes). TEIs provide constraints and flux estimates that can also be exploited to reconstruct past environmental conditions, and to estimate the possible amplitude of future climate changes.

Despite all these major implications, the distributions, sources, sinks and internal cycling of TEIs are still largely unknown because of the lack of appropriate sampling and (up to very recently) the insufficient sensitivity of the analytical tools. Recent advances now provide the marine biogeochemist community with a great opportunity to make substantial contributions to the understanding of the oceanic system. It is in this general context that the international GEOTRACES programme intends to characterize the TEI distributions throughout a Global Survey, consisting of ocean sections, and regional process studies, using a multi-proxy approach. The proposed GEOVIDE section will be the French contribution to this Global Survey in the North Atlantic Ocean (Fig. 1). 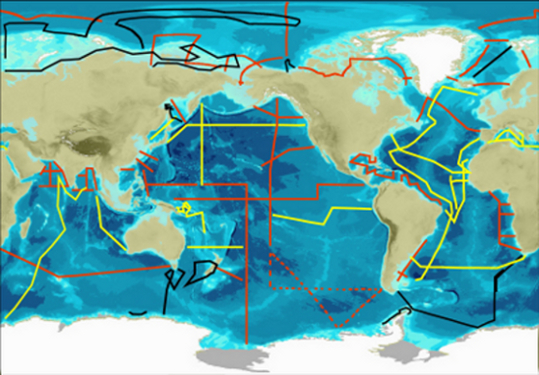 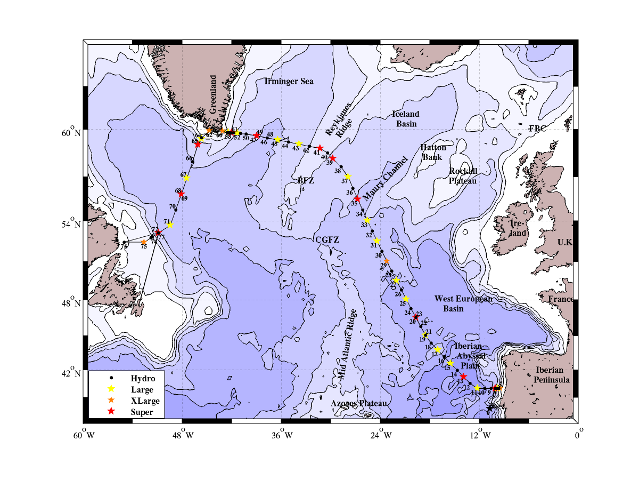 The GEOVIDE section was selected with the underlying justifications:

1- The North Atlantic plays a key role in the Earth climate. It represents a major overturning area of the planetary Meridional Overturning Circulation (MOC), and a major sink of CO2 (CANT) 5,6. Since 2002, the OVIDE[1] project contributes to the observation of both the circulation and the water mass properties in the North Atlantic. Despite the importance of the MOC on Earth Climate, it is very challenging to estimate its strength with a reasonable error 7,8. The MOC strength estimated from OVIDE cruise in-situ measurements helped to validate a MOC time series (based on altimetry and ARGO float array data) that exhibits a 2 Sv drop between the mid-1990s and the 2000s 9, consistent with other modelling studies 10. During OVIDE, the contribution of the most relevant currents, water masses and biogeochemical provinces have been localized and quantified. This knowledge is crucial for the establishment of the best sampling strategy of the TEIs.

The Labrador Sea section offers a unique opportunity to complement the MOC estimate and to analyse the propagation of anomalies11 in temperature, salinity and TEI concentrations along the boundary current of the subpolar gyre coupling both observations and modelling.

Moreover, very recent results evidenced that the North Atlantic CO2 uptake was reduced by the weakening of the MOC 12, finding that the uptake of CANT occurred almost exclusively in the subtropical gyre. In contrast, natural CO2 uptake dominated in the subpolar gyre. In the light of these new results, one of the issues to be addressed is the coupling between the CANT and the transport of water, in order to understand how the changes in the ventilation and in the circulation of water masses affect the CANT uptake and its storage capacity in the different identified provinces.

Finally, the North Atlantic being the starting point for the ocean conveyor, it is particularly interesting to study in this key region how TEIs are transferred to the deep ocean, through both ventilation and particle sinking and how important are deep convection processes on the TEI distribution within the global ocean.

2- A better assessment of what controls the organic production and export in this area, and the role played by TEIs in these processes is essential. Pronounced spring phytoplankton blooms occur in the North Atlantic in response to upwelling or water column stratification 13,14,15. These blooms are initially dominated by diatoms 16,17. Such diatom blooms are known to trigger substantial export of fast-sinking particles 18,19, and represents a major scavenging process of particulate organic carbon, macronutrients, and TEIs to the deep ocean. Trace metal inputs in the North Atlantic seem to be high enough to prevent any limitation. However, Fe limitation or co-limitation (Fe/macronutrients) have been observed in the North Atlantic 20,21 and the subpolar gyre, resulting in the formation of the seasonal high-nutrient, low chlorophyll (HNLC) conditions in this region at the end of the spring bloom 22.

3- In the North Atlantic, TEI distributions are influenced by a variety of sources at ocean boundaries.

The ocean boundaries of particular importance in this area are the atmosphere (dust vs. anthropogenic inputs) and the margins (Iberian, the East and West Greenland, and the Labrador ones).

– Ocean-atmosphere interface: Atmospheric input is an important source of TEIs in the North Atlantic Ocean due to the combined effects of anthropogenic emissions from industrial and agricultural sources and mineral dust mobilized from North Africa 23,24. Along the GEOVIDE section, a decreasing gradient of mineral dust concentrations is expected from south to north (by a factor of at least 10 23,25, Fig. 2). However, atmospheric fluxes in the North Atlantic still need to be better assessed26, and a multi-proxy approach will help to better constrain these fluxes (aerosols, 210Pb, Al, Mn, Fe, Nd and Th isotopes).
– Margins: Continental shelves act as a filter of the TEI supply from sediments or rivers (Fig. 2). Some TEIs are removed on continental shelves whereas others are thought to be mobilized from the solid phase at the land-ocean interface (e.g. Fe and likely other micro- and macro-nutrients, such as Cu, Ni, Mn, and Si 29,30,31). The proposed cruise track intersects several margins, thus allowing the quantification of continental sources in these very contrasted continental shelf regimes. TEIs will help quantifying the fluxes at the margin/ocean interface, but also identifying the nature of the associated processes (e.g. involvement of redox processes).

4- The potentials of the 231Pa/230Th ratio for past rates of ocean circulation and of eNd as thermohaline circulation tracer have led to many exciting results in recent years 32,33, 34 for the reconstitution of the Atlantic circulation. There is a debate about the interpretation of 231Pa/230Th paleo-records in the Atlantic 32,33: effects of particle fluxes versus those of water circulation. Only one single 231Pa profile in the Subpolar North Atlantic was published so far 35 (database posted by G. Henderson[1], updated July 2012). Regarding Nd isotopes, although several profiles of dissolved (or total) Nd isotopes are available in the boundary currents along Greenland and the Labrador, there are very few profiles in the ocean interior in the GEOVIDE area 36,37. In addition, more and more studies emphasize the importance of dissolved/particle interaction in the control of the Nd isotope cycles, but eNd data in the particles are inexistent in the Subpolar North Atlantic to our knowledge. For these reasons, documenting those tracers in both phases in that area will bring very important new constrains for understanding the cycles of these tracers and their use in the modern and past oceans. Proxies of nutrient utilization, such as the silicon stable isotopes (δ30Si) of diatom silica, provide a mean of reconstructing the behaviour of past geochemical cycles and the past strength of the biological pump and its influence on atmospheric concentrations of CO2. Successful use of the δ30Si of diatoms accumulating in sediments for reconstruction of past silica cycling, however, requires a reasonable understanding of the δ30Si of dissolved Si (DSi) throughout the ocean and the processes that control its distribution. Combining studies in the Southern Ocean 38,39 and North and Equatorial Pacific 40, with a global circulation model 41 has revealed the role that ocean circulation and biogeochemical cycling play to control the distribution of silicon isotopes within the ocean. Largely missing from this dataset, however, is the North Atlantic 38.

In this general context, the main scientific objectives of GEOVIDE are to:

1- Better know and quantify the MOC and the carbon cycle in a decadal variability context, adding new key tracers

3- Investigate the link between the TEIs, and the production, export and remineralisation of particulate organic matter

GEOVIDE will be a major French contribution to the Global GEOTRACES TEI survey (official GA01 GEOTRACES section). It will complement the other international cruises in the North Atlantic. Combining the results of these cruises, together with the 57 planned sections on a world scale, will ultimately result in a three-dimensional picture of the TEI distribution in the global ocean.

GEOVIDE will also actively contribute to other international programmes, such as SOLAS, IMBER, CARBOCHANGE and CLIVAR. GEOVIDE is part of the axis 2 of the LabexMER “A changing Ocean” and is linked to the Equipex NAOS “Novel Argo Ocean observing System”, in particular to the WP5 “Deep oxygen floats in the North Atlantic”.